Purchase this case of six wines and explore the unique differences between Right and Left Bank:

2 in stock.
As our stock is sold through our two retail outlets and online, stock levels are provided as a guide only and are liable to change. 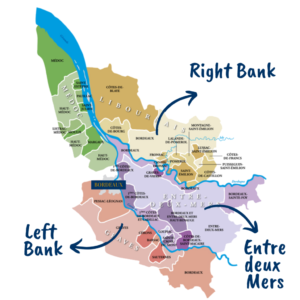 Left Bank and Right Bank are two Bordeaux winemaking regions separated by an estuary and two rivers. Situated on the west coast of France, Bordeaux is split in two by the Gironde Estuary, which divides into the Dordogne and Garonne rivers. When looking at a map of the region, the area to the north and right of the Gironde is the Right Bank and the areas below and to the left constitute the Left Bank.

Château Beauvillage is a family property where 3 successive generations of empassioned winegrowers expressed their devotion to their lands of 21 hectares.
The estate is located in Cissac, between Pauillac and Saint-Estèphe. On a typical Medoc terroir composed of a mixture of clay and chalk. Several actions of green harvesting take place during the vegetative cycle in order to reach the highest harvest quality possible. Their wines are a true beautiful terroir expression.

Margaux Third Classified Growth of 1855, Château Desmirail illustrates, through its wines, the typical qualities of its exceptional terroir. Owned by the Lurton family since 1992, Château Desmirail has equipped itself with an infrastructure that matches its terroir, allowing for the elevation of this Cru Classé to the highest level.
The Château Desmirail vineyard extends over forty hectares cultivated with the greatest respect for the environment through a sustainable viticulture. The soils are made up of gravel dating from the Quaternary period, the terroir of choice for Cabernet Sauvignon, Merlot and Petit Verdot.

The vineyard has an average age of its vines of between 40 and 50 years, and the consultant oenologist is the legendary Eric Boissenot. This St Estephe is wonderfully balanced on palate. Refine tannins with great freshness of acidity and long elegant finish. This is a more approachable Saint-Estephe drinking wonderfully now with still a few years of evolution to come. Bouquet of ripe cherries, black currants, floral, smoky and toasted woody notes. This is an impressive red.

This Micro vineyard owned by the Artigue family, surrounded by Crus Classés Barde Haut et Clos de Sarpe is located in the heart of the vineyard of Saint-Emilion, on the famous clay-limestone plateau. In the cellar, the work is divided into parcels and the winemaker intervenes as little as possible, to best express the specificities of the terroir. Prior to becoming a vineyard and winery, Chateau Galeteau started out as a farm in the 1600s. At the time, the estate was better known for the production of agricultural products. In fact, the chateau, which continues to maintain the look of a 17th-century farmhouse was built in 1658, making it one of the older chateaux in Saint Emilion that is still in use today. Today, Chateau des Laudes is owned by the Artigue family. The wine produced on this property, a former 17th-century farmhouse, will only appeal to discerning wine lovers. 80% Merlot, 20% Cabernet Franc.

This tiny property stands on the banks of the Barbanne river – which explains the significant percentage of gravel in the soil. On the opposite bank is the appellation of Pomerol to which the river carries iron from the subsoil, adding a note of truffle to the Merlot. Thanks to the gravel the Cabernet Franc grows beautifully here hence the high percentage in the blend. The ensemble of the terroir, skilled oak aging and manual harvest means that the wine is ripe, fruity and full-bodied. After a couple of hours in a decanter, the oak fuses with the fruit resulting in a stunning bouquet. Vinification happens in cement tanks which are slightly porous like oak and add a touch of elegance. 79% Merlot, 21% Cabernet Franc, aged for nine months in oak barrels (50% new, 25% 1-year-old, 25% 2-years-old).
Château Prieurs De La Commanderie, Pomerol 2016 – 80% Merlot, 20% Cabernet Franc

Château Prieurs de la Commanderie is a minute 750 case production from the stable of Château Fayat. This property is owned by one of the most prosperous and renowned families in France. Having made their fortune in the construction industry, they have now invested millions in their portfolio of Chateaux La Dominique (Saint Emilion Grand Cru Classé), Fayat (Pomerol), and Clément Pichon (Haut Médoc). Situated on the fresh gravel soils and burying into a deep subsoil of the clay that
gives Pomerol its inimitable style, Prieurs de la Commanderie is a wine to be discovered in recent vintages. Jean Luc Thunevin, a close friend of Clément Fayat has exploited a partnership upon one of the other Fayat properties, and his influence and expertise in their winemaking has been said to be immeasurable.
Browse
Search
NEWSLETTER SIGNUP