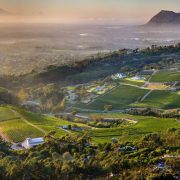 The wine’s complex bouquet gains even more vibrancy once the citrus flavours encounter the palate’s rich, creamy texture, which is achieved during maturation on the lees in stainless steel tanks for 4 months prior to bottling. A portion of 5% Sémillon was incorporated into the blend to add some depth to the wine’s otherwise racy acidity and rich core, resulting in a mouthfeel that demands a sip more. This is a classic Constantia Sauvignon Blanc, showing beautiful elegance, a well-defined minerality and the kind of structure that allows for superlative ageing under ideal cellaring conditions.

Enjoy with salmon fish cakes with a citrussy-butter sauce.

2 in stock.
As our stock is sold through our two retail outlets and online, stock levels are provided as a guide only and are liable to change.

After Simon van der Stel’s death in 1712, his Constantia farm was split. The 60 hectares of land (today known as Constantia Glen) would originally – because of its position on the steep slopes of the Constantiaberg, overlooking the Constantia Valley – have been too difficult to farm and was probably used for grazing of livestock for the first hundred years of its history. Johannes Gregorius van Helsdingen was the first to plant vines there and by 1832, when his nephew Johannes Frederick inherited the property, it was a productive farm under 15 000 vines.

A fairly rapid succession of owners followed in the next 11 years until 1843 when when Sebastiaan Valentyn van Reenen bought the farm and renamed it Glen Alpine. Under the van Reenens Glen Alpine prospered and became a renowned wine estate visited by many callers to the Cape including Queen Victoria’s son, Prince Alfred.

In 1851 the land was sold once more and the property changed hands several times over the next 100 years during which time the land was used primarily for small scale farming with fruit trees, a small vineyard and dairy, but it became largely overgrown with forest vegetation.

The Waibel family from Austria bought Glen Alpine farm in 1960 but the land was not commercially farmed until 1995 when it became an elite stud farm for champion Red Angus breeding stock. Around 1998, Dieter Waibel, together with his son and son-in-law, started planning to bring the land back to its original function as a wine farm.

In January 2000, following a devastating wild fire on the Cape Peninsula that destroyed most of the farm vegetation and required that the Red Angus cattle be evacuated, extensive soil tests took place around the property. The first vineyards were planted in September 2000 and 29 hectares are planted with wine grapes today. The Waibel’s determination to produce high quality wines has proven a success.

Intense varietal character is the cornerstone of this classically-styled Sauvignon blanc.