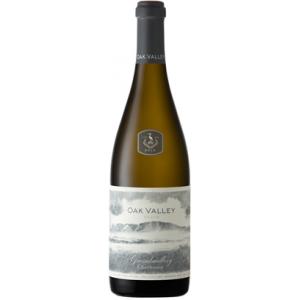 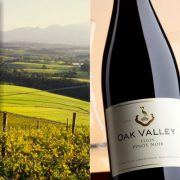 The high altitude, unique microclimate, and whole bunch wild fermentations, create a wine that is delicate, yet rich in character, carrying a strong sense of place.

4 in stock.
As our stock is sold through our two retail outlets and online, stock levels are provided as a guide only and are liable to change.

In 1898 Sir Antonie Viljoen, a medical doctor and graduate of Edinburgh University, bought Oak Valley. He was responsible for establishing the first commercial apple orchards in the area and also became a senator in the Cape parliament. He was knighted by King George in 1916 for his efforts to reconcile the Boers and Brits in the bitter aftermath of the Boer War.

At the time he bought the land, plans were underway to build a pioneering railway from Sir Lowry’s Pass to Caledon. Elgin existed in isolation until the track opened in 1902. The line was chiselled through solid rock to cross Sir Lowry’s Pass – the steepest gradient in the country. This inspired an era of prosperity in Elgin, now renowned for its fruit, greenhouse cut flowers, beef cattle and, increasingly, for its high quality cool climate wines. With vineyards up to 500m above sea level, the higher altitude and colder winters make Elgin the coolest wine region in South Africa. The estate, set on 1786 hectares of land in the Elgin Valley, is now owned and run by the Rawbone-Viljoen family.

The Groenlandberg’s highest peak is 1,181m, higher than Table Mountain. It is an isolated fynbos-covered often cloudy mountain that forms the backdrop of the estate. It has a major influence on fruit development as it casts its shadow over the vines and directs cold air down the valley at night. The Groenlandberg Chardonnay is hand-picked and sourced from the Oak Valley mountain block, planted in 2008 on Bokkeveld shale, rich in clay soils, situated on a south-facing slope at an altitude of 430m. The high altitude, unique microclimate, and whole bunch wild fermentations, create a wine that is delicate, yet rich in character, carrying a strong sense of place.