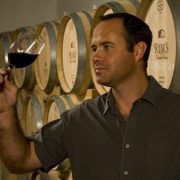 3 in stock.
As our stock is sold through our two retail outlets and online, stock levels are provided as a guide only and are liable to change.

Rijk’s is situated in the small town of Tulbach, 120km north east of Cape Town and 90km east of the Atlantic coast in a Mediterranean climate area. This historic town has at least 32 national monuments and the valley is surrounded by the Winterhoek, Obiqua and Witzenberg mountains, often snow-capped in winter. Very dry summers with fresh south easterly winds keep vineyards healthy and disease free while the surrounding mountains ensure cool summer nights.

Lover of good food and collector of good wines, Neville Dorrington had been working in Cape Town for more than 20 years and in 1996 he and his family decided to move to the countryside and grow and produce their own wine. They found 137 of soil that had never been cultivated in the Tulbagh Valley and the Rijks farm was founded.

In 1997 14 hectares of vines were planted, and the following year a further 12 hectares. These included many different cultivars – Sauvignon Blanc, Chardonnay, Chenin Blanc, Cabernet, Cabernet Franc, Merlot, Shiraz and Pinotage with the idea of identifying which grapes best suited the climate. In 2000 the first grapes were harvested and received in the cellar. Twelve years later, in 2011, a decision was taken to concentrate on the cultivars best suited to the farm and soil – Chenin Blanc, Pinotage and Shiraz. All the other cultivars were pulled out and replaced. In 2016 Neville’s son, Tiger, officially joined the farm, and now works full-time as head of Sales and Marketing.

Vines that produced this 100% Pinotage were grown on low yielding, well drained vertical shale/schist. Grapes were night harvested by hand. A 48-hour cold maceration period was given prior to fermentation to extract colour and fruit. Extraction during fermentation took place by doing manual punch downs three times a day. Skins were gently pressed before fermented dry. Malolactic fermentation took place in barrels after which the wine was matured in 60% new and 40% 2nd fill French oak barrels, then bottled and allowed to age until release.