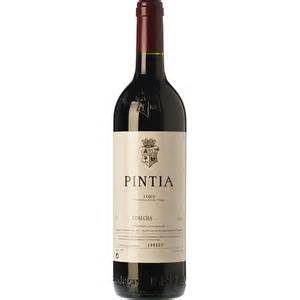 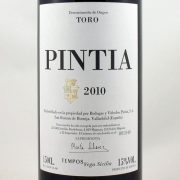 1 in stock.
As our stock is sold through our two retail outlets and online, stock levels are provided as a guide only and are liable to change.

I made a brief but profitable visit to Bodegas Pintia with Pablo Alvarez and winemaker Xavier Ausas. He told me that they started to buy vineyards in 1997 without a clear idea of what style of Toro wine they would make. “We heard that Toro was a very good region,” he told me, “a region of perhaps rustic wines. We wanted to produce a different style of Tempranillo. We wanted to make a more elegant wine. In Toro the Tempranillo is wilder and rustic while in Ribera del Duero it is more elegant. The Tempranillo is more like a bull in Toro. If you don’t control it, you make wines that are over-ripe.” They ended up acquiring 100 hectares of vineyard, 50% of purchased vineyard and the remainder subsequently planted over ten years. “We like short names for the wines as they are easier to remember,” Pablo answered when I asked where the name originates. I then inquired about the vinification: “During the entire process, it is necessary to keep the fresh fruit aromas, which is the reason we have cool rooms before fermentation. The maximum degree of temperature during fermentation is 28 degrees to protect the aromas instead of 31-33 degrees in Ribera del Duero. After fermentation, we put the wine immediately in new oak barrel without maceration. We use 70% French and 30% American oak and the new oak protects the fresh fruit aroma. We make the malolactic (fermentation) in barrel and after 12 months we mix the lots, and any that are unsatisfactory are distilled. We don’t mature more than 12 months in barrel since the fresh fruit aromas come down and appear as a liqueur (volatile) aroma.” Robert Parker